Inspired by his daughter Michele, second-generation watchmaker Jack Barouh began his rise to prominence in the watch industry by creating a line of colorful children's watches that were extremely well received. Sophisticated grown-up designs followed, and ultimately a new fine watch brand was born. Michele Watches made its debut with the celebrated CSX Diamond collection, the first of many collections to follow. 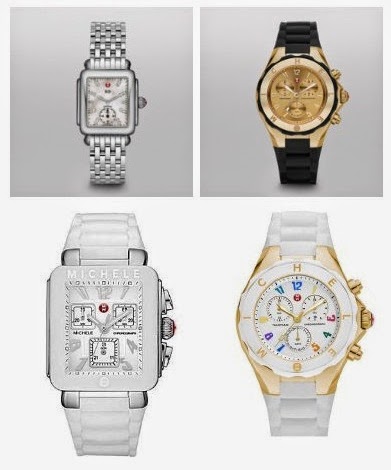 Michele Barouh herself joined the company in 2000, having quite literally grown up in the business, and now serves as its Creative Director. Michele Watches transcends global boundaries, relying on international designers to create fine quality timepieces for the world market. Sophisticated and unique, the MW Collection displays cutting-edge fashion, an unwavering attention to detail, and an emphasis on quality and value that honors three generations of watchmaking tradition.

Navigate through life with Michele timepieces. Each Michele watch presents an ageless glamour to the modern movement of time. Michele watches celebrates contemporary fashion and romanticism fused with time-honored craftsmanship, luxury and expertise.

Our history begins in Belgium in the 1940's with watchmaker Maurice Barouh's strong belief in quality and refinement. Watches were his expression of choice. His designs are a reflection of his beliefs in craftsmanship, styling and quality.

Maurice ultimately passed his passion on to his son Jack. Operating in the Latin American arena, Jack Barouh proceeded to gain fame as an individual with a keen eye for trends and a dedication to detail. Expressing his heritage, Jack proceeded to design "winners" time and again.

The creation of Michele Watches came with the birth of Jack and Rita's first child, Michele. At first, children's watches were produced; colorful bright pieces that were extremely well received. The success of this product line awakened an interest in building a brand. It was time for Jack to test his talents in other markets. Miami Florida was chosen as the platform for the launch of Michele Watches and the "MW Collection". In the year 2000 the third generation of Barouh's joined the company, Michele, followed by Jeremy Barouh in 2002.

Today, Michele Watches is a $50 million business which has become part of Fossil. Fossil is a global leader in the fashion watch market with a proven track record of attracting and expanding brands. Jack Barouh made the decision in 2004 to merge his company with Fossil in order to give Michele Watches an even greater position of strength in the global watch industry. However, despite being part of a large, publicly-traded company, Michele Watches still operates as a family business, with the design and business decisions made by the Barouh family in partnership with Fossil.
Posted by Unknown at 7:00 PM

Email ThisBlogThis!Share to TwitterShare to FacebookShare to Pinterest
Labels: Michele